This uniquely formulated powder treatment is used to remove buildup of urine and minerals from cloth diapers and garments. This is not a detergent. 10 pacs per bag.

FOR USE ON CLEAN DIAPERS (this should not be used as a detergent):

*If buildup is severe, it may take up to three back to back consecutive treatments to get your diapers clean.  No need to dry in between multiple treatments.

Best Bottoms and FUZzibuNz seemed to repel. Washing with grovia per package instructions plus 3 additional washes seemed to do the trick. I want to say my results were definitive; however there were a few mistakes with my methodology:

1) I was testing initially with a infant Tylenol syringe. When repelling kept occurring after first few washes I tried to scrub dawn on the surface-I used a spray bottle to add water. It took a few sprays before I observed the water didn’t repel which leads to the assumption that the syringe were not the correct tool to test absorption (perhaps they lacked the speed/force of the spray bottle). Would the diapers have repelled as pictured above if I began the experiment with the spray bottle instead of the syringes?

2) Unknown cause of Repelling: The diapers were used and the original owner had issues with leaking. I’m not sure their wash routine was sufficient. I used Vaseline (Hopefully you didn’t faint while reading that)-the flip brand inserts seemed to handle it ok and I used those at the same time as the other two brands mentioned above—there seemed to be no issue with the flip inserts. Also, those came from the same owners but were not used as frequent. Also I’m not sure where the flip and best bottoms came from before previous owners (some new, some used)? The FUZzibuNz I bought new. Oh and Vaseline was used for at most 3 weeks probably just 2. 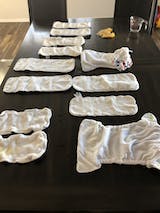 Best investment ever!!!!! Definitely gets the odor out of the inserts and shells. Giving that fresh clean smell. I’m so happy that I purchased this product

Exclusions apply. First orders only. Emails are usually sent within an hour. If you do not receive your email check your spam folder.

SIGN UP & RECEIVE A 10% OFF CODE FOR YOUR FIRST ORDER!

Exclusions apply. First orders only. Emails are usually sent within an hour. If you do not receive your email check your spam folder.